The Magic and Medicine of the Birch Tree 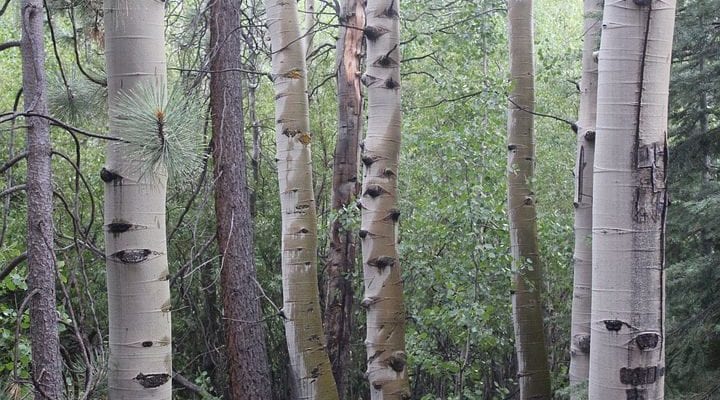 The Magic of Birch

Long, long ago on an early winter’s day an old old herb woman died and was buried in the forest outside the village by her old old woman friends. The woman’s daughter, who had left the village many years before to see something of the world, returned upon hearing of her mother’s death. In her grief, the daughter walked the path into the forest in search of her mother’s grave. A familiar voice called from the distance, “Eloise!” (for that was the daughter’s name). Eloise peered through the trees toward the voice and saw a crescent moon setting over a ring of birch trees shimmering ghostly in the glow. Eloise rushed to the grove and entered into it.

In the middle of the grove, a circle of birch bark floated on a pool of water. Eloise knelt on the soft mossy bank and gazed into the water within the birch ring. There she saw her mother’s smiling face. “Oh Mother,” Eloise cried, “I’ve missed you so!”

Her mother replied, “Eloise, my daughter, when I died, I was buried here within this grove and became a birch tree as have all the wise women before me. Look behind you to see me as I am today.”

Eloise turned to see a birch tree wave her branches gracefully though there was no wind. Eloise ran crying to her mother and sank to the forest floor, leaning against the smooth bark of the tree.

Her mother began to speak soothingly to Eloise the magic of the birch tree. “I am the tree of beginning and birth. I bring protection for all. Pots, dishes and cups made from my wood never empty of food and drink. I am the tree of the first new moon each lunar year. I am Beth, the Lady of the Woods. “Mother,” Eloise emplored, “what can be done for me? I am alone and have no child to love and cherish.” Beth looked lovingly upon her daughter and lowered her branches to hold Eloise safe and warm. “Take one of my branches, daughter, to our cottage and with it fashion a cradle. Build a fire in the hearth with the chips and scraps and place the cradle near the fire. Lie then down upon the hearth rug to sleep and we shall see what we shall see.”

Eloise returned home and did all her mother told her. When she woke in the morning, her belly began to swell, her breasts became full and tender. By and by, a baby was born to Eloise, a daughter, whom she named Samara. Samara brought great joy to Eloise and grew in the knowledge of the forest plants and animals.

Eloise and Samara returned to the birch grove many times every year for the comfort and abundant gifts the mother birch bestowed upon them. Eloise and Samara gathered sap, the blood of the trees, each late winter to boil down for mineral rich syrup. The roof of their tiny cottage was well shingled with birch bark. They gathered the leaves in spring and summer to steep in vinegar and drink as tea. Samara delighted in making a new birch broom each year from twigs bound around a stout branch.

Many years passed. Samara grew into a strong and self-reliant woman. Eloise grew old and, as happens to us all, died and was buried next to her mother in the birch grove. In her grief, Samara walked the well-worn path to the birch grove seeking comfort and solace. A familiar voice called to her, her mother’s voice, calling….”Samara.”

The Medicine of Birch

The paper birch, Betula papyrifera, is a medium sized deciduous tree, which grows up to 60-90 feet tall. The leaves are alternate, have serrated edges and are almost pelvis shaped, being wider at the petiole and becoming narrower and sharply pointed at the tip. In the spring, male and female flowers are borne on separate sweet smelling catkins, which produce beautiful little seeds on papery wings. The whitish bark peels off and rolls much like the papyrus the ancient Egyptians wrote on (hence the name Betula papyrifera), causing a person to wonder what ancient wisdom must be written on birch’s papyrus-like bark. The bark can be peeled from birch trees after a storm’s blow down and pressed flat until dry to be used for writing or painting upon.

Birches tend to grow in stands (a continuous family reunion), and are somewhat spindly with little forking at the lower end of the trees. Birches prefer moist, well-drained sites and thrive in open and dense woods. Usnea spp., Platisma glauca (also called Ragbag) and many other lichens grow on the entire length of birches. Many varieties of mosses enjoy the shelter and moisture collecting at the base of the trees. Northwest Washington is at the southern end of paper birch’s range, which dominates the taiga, the cold northern coniferous forests from the Atlantic Ocean to the Pacific. Birches are rigorous trees; the stump of a cut or fallen birch will often sprout new growth. Birches are short lived; a 100-year old birch is very old.

In autumn, the ever shortening days and longer nights signal the birch to release a collection of hormones. One of the hormones, abscisic acid, initiates dormancy. It acts as an inhibitory that counteracts the growth hormones and induces ethylene formation. Together, the ethylene and other hormones cause a physiological change in the tree whereby the base of the leaf petiole is walled off from the branch. The leaves, with no access to nutrients, die and drop off the tree. This change towards dormancy and the millions of functions and changes happening inside a tree standing so still boggles the brain.

Medicinally, the birch leaves and twigs act superbly as an anti-inflammatory analgesic pain reliever. The twigs are steeped in high proof alcohol to extract and preserve the wintergreen oil (terpene), which contains methyl salicylates. Twigs and small branches are harvested in the spring when the sap begins its upward movement to the tips of the branches and in the summer. As fall approaches, terpene production goes down, only to be boosted in the spring once again. The oil is useful in treating those with rheumatism, arthritis, calcium spurs, heart and kidney edema, chronic cystitis and high cholesterol. The bark and dried leaves are useful as a tea. 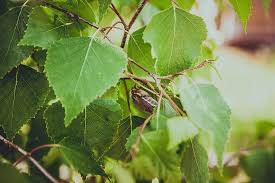 The leaves are gathered in the spring and dried for use in infusions.  Gather the leaves in the spring when they are fully opened and in the morning before the heat of the day releases the essential oils. Birch is astringent and used for its curative effects on skin eruptions and wet eczema. Try steeping an ounce of dried leaves in a pint of water for 4 hours, strain, and use the medicinal infusion on the skin as a wash to soothe and heal.

Birch is also a “bitter,” acting as a stimulant and tonic on the digestive system. I found that by soaking the fresh leaves in apple cider vinegar for a few weeks, the bone building and immune strengthening minerals and micronutrients are released and easily added to drinking water, salads and cooked foods. Vinegar is a good medium for extracting birch’s nutrients and medicine. Use fresh leaves and chopped twigs or take the time to strip the bark from the twigs.

The bark and heartwood contain medicinal oils including Betulin. Betulin, a triterpenoid, meaning a metabolite of a terpene compound, is found in the bark and heartwood of the birch tree. In studies, betulin has shown biological activities with apparent effects on glucose absorption, glucose uptake, insulin secretion, and diabetic vascular dysfunction (1).

The benefits of betulin do not stop there as it also has anti-inflammatory, analgesic, and antiviral activity actions in the body.

Birch trees are wonderfully fragrant after a rain, especially when the sun comes out from the clouds and warms the leaves. Terpenes are released with the heat of the sun on the wet leaves and the scent has a welcome soothing effect on the soul. Scent, a superb and easy way to influence healing, is easily accessed by the brain by simply inhaling.

Suzanne Tabert, bioregional herbalist, is director of herbal education and herbal mentor at the Cedar Mountain Herb School. An herbal medicine instructor for 30 years, Suzanne teaches with great passion and excitement, bringing her wealth of herbal knowledge to students in an engaging and vibrant manner. She is the primary instructor at CMHS and an adjunct faculty at Bastyr University. Taking students to wild places and giving them tools to engage and connect with flora, fauna, and the exquisite beauty of nature is the icing on the cake of life, and one way that Suzanne is making a difference in the world, one person, one group at a time. She is currently writing a wildcrafting book that will be able to be utilized by people of all walks of life who wish to take their health back into their own hands. Cedar Mountain Herb School is a member of the American Herbalists Guild and the American Herb Association.